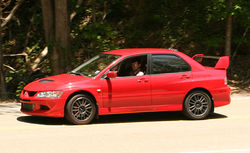 The Evolution was changed again in 2003, this time sporting Super Active Yaw Control to handle traction and a 6-speed manual gearbox. It was available with 280 PS (276 hp/206 kW) in three trims: standard (GSR in Japan), RS (devoid of all excess components, such as interior map lights, power windows/doors, and radio) and MR. RS Editions came with a revised limited-slip front differential. The new Evolution also sported Altezza taillights.

The Lancer Evolution VIII is unique among its successors and predecessors, since it is so far the only Evo that used the same central semi-triangle core that was used by Lancer, Adventure, Strada, Grandis, Montero and Outlander.

The Lancer Evolution VIII MR uses slick-response Bilstein shocks for improved handling. The aluminium roof panel and other reductions in body weight have lowered the centre of gravity to realize more natural roll characteristics. Detail improvements have also been made to Mitsubishi’s own electronic all-wheel drive, to the ACD 5 + Super AYC 6 traction control and to the Sports ABS systems.

The Lancer Evolution VIII displayed at the 2003 Tokyo Motor Show took the MR designation traditionally reserved for Mitsubishi Motors high-performance models and used first on the Galant GTO. Other parts on the MR include BBS alloy wheels, Bilstein shocks, and an aluminium roof. In the United Kingdom, many special Evolutions were introduced, which included FQ300, FQ320, FQ340, and FQ400 variants. They each came with 305, 320, 340, and 400 hp (227, 239, 254 and 298 kW), respectively. It is rumoured that the ‘FQ’ stands for ‘Fucking Quick’.

The FQ400, sold through Ralliart UK, produces 302.13 kW (405.2 hp), from its 2.0 L 4G63 engine as the result of being specially modified by United Kingdom tuning firms Rampage Tuning, Owen Developments, and Flow Race Engines. At 202.9 hp (151.3 kW) per litre, it has one of the highest specific output per litre of any roadcar engine. With a curb weight of 3200 lb (1450 kg), it achieves 0-60 mph in 3.5 seconds, 0-100 mph in 9.1 seconds, 1/4 mile in 11.9 seconds, and top speed is 174 mph (280km/h), whilst costing £47,000. BBC’s television series Top Gear demonstrated that the FQ-400 could surprisingly keep up with a Lamborghini Murcielago around a test track. The Stig recorded a Top Gear Power Lap Times of 1 minute 24.8 seconds, 4.2 seconds quicker than the Murcielago’s time of 1 minute 29 seconds. In a similar test conducted by UK supercar magazine evo, the Evolution was able to lap the Bedford Autodrome faster than an Audi RS4 and a Porsche Carrera 4S.

The Lancer Evolution VIII was also the first Evolution to be sold in the United States, spurred by the success of the Subaru Impreza WRX which had been released there just three years prior. The Evolution VIII found its true competition in the Subaru Impreza WRX STI model the same year as the Evolution VIII’s US introduction. However, the internal components for the American versions were largely stripped-down versions of the specifications for the Japanese Lancer Evolution VIII. No US-spec Evolution model prior to the Evo X has active yaw control, including the 2006 Evolution IX. The American 2003 and 2004 GSRs are without the helical limited-slip front differential and 6-speed manual transmission. The 2004 US spec RS models, however, do have a front helical limited-slip differential. All 2003, 2004 and 2005 RS and GSR models have the Japanese Evolution VII’s 5-speed transmission. The MR edition was introduced to the US in 2005, with ACD and the only model with a 6-speed transmission. The 2005 US spec RS and GSR have the ACD standard, and the front helical limited-slip differential is now standard on all models. The timing and tuning are also slightly lower than its Japanese counterpart, allowing it to adhere to the strict emissions regulations of the United States. However, the US version has a quarter mile time of a respectable 13.1 seconds.

Most Evolution VIIIs have a carbon fiber rear spoiler with matching body-color endplates. Furthermore, the US version of the Lancer Evolution VIII 2003-2005 were given bulkier rear bumpers than their Japanese counterparts to accommodate US safety laws in the form of the metal rear crash bar. All Evos have lightweight aluminum front fenders and hood. MR and RS editions have an aluminum roof. Additionally, MR Editions come equipped with 6-speed transmission, bilstein shocks, and factory optional BBS wheels.

The basic RS Edition does not come with an air conditioning system, power windows, locks and mirrors, an audio system, and map lamps. Also deleted was the Anti-lock braking system which came standard in other models..